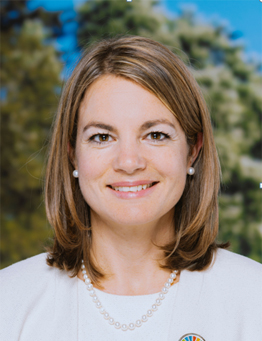 President of Climate & Sustainability, Co-Founder of SHE Changes Climate, Advisor to the UN
Elise Buckle is President and Director of Climate & Sustainability, a platform of collaboration for change-makers focusing on partnership development for climate, people and nature. She is also the Co-Founder of SHE Changes Climate, an initiative focusing on women empowerment, and Board Member of the Climate Action Accelerator.

Elise is highly committed to making this world a better place for people and nature. She has been working in the field of sustainable development and climate change for nearly twenty years and truly believes in radical collaboration, skillful diplomacy and movement building.

Her vision is that we can all work together as One team for One Planet, going beyond logos, egos and institutional boundaries to address the planetary emergency and shift towards a systemic transformation for climate, people and nature.
She is working both at global and local levels: “thing global, act local” is her preferred mode of action.

At COP26 in Glasgow, she hosted and moderated the COP26 Nature Day focusing on cities and regions, sharing best practices with mayors and local leaders around the world for a nature positive and climate neutral recovery.

She is currently advising the COP27 Presidency team on inclusiveness and diversity.

She has been advising the UN on the 2030 Sustainable Development Agenda with a focus on partnership development for Climate, People and Nature.
She is also the Founder and President of Climate & Sustainability, a platform for collaboration for change-makers. She developed and grew the Planetary Emergency Partnership from 30 to 300+ partners during the emergence of the COVID 19 crisis and is now coordinating the green and nature positive recovery partnership.
She was the senior advisor to Dr. David Nabarro, a high-level diplomat appointed by the Secretary General to develop the Nature-Based Solutions coalition co-led by China and New Zealand for the UN Climate Action Summit in New York in 2019. The coalition was joined by 33 countries and more than 200 public and private partners.

Previously, she worked for Climate Action Network International as Special Projects Director and was responsible for leading three global initiatives: the Climate Vulnerable Forum Summit, the Step Up campaign, and the Shift-SEA project for shifting financial flows towards clean energy access in South East Asia.

She also worked as the special Advisor to Ambassador Khan, Chief Negotiator of the COP23 Presidency, a very inspiring woman who led the Talanoa Dialogue as an inclusive multi-stakeholder dialogue designed to raise climate ambition and accelerate action.

She coordinated and led several global campaigns on climate policy and innovative finance with WWF during the G20 French Presidency, WBCSD for the Low Emissions Solutions Conference during COP22, and on CSR with the finance sector at UNI Global Union.

She attended most COPs since 2005 when she went to Montreal for the Members of the European Parliament, but she is also passionate about local action and grassroots mobilization, including by empowering women and mentoring youth leaders.

She served as a local politician at the City Council of Nyon, as a Member of the Jury of the Sustainability Prize and a co-founder of the inter-party Climate Group at the Council.

Earlier in her career, she worked in the humanitarian and development field with a focus on building resilience for local communities in Latin America and Central Asia.

Active and enthusiastic, she thrives in multi-cultural teams and enjoys developing collaborative partnerships with a wide range of stakeholders to harness global excellence and championship for a sustainable future.

She holds a Masters in Environmental Policy Planning and Regulation from the London School of Economics and a Masters in International Relations and Development from the Institute of Political Studies (Sciences Po Paris).

Elise is originally from France. She lived in Canada, Chile, Tajikistan, UK and worked in Africa and the Middle East. She now lives in Switzerland with her husband and two children. She loves connecting to nature, mountaineering, yoga and doing outdoor activities with family and friends. Elise is also a writer, the author of two books, and has been teaching for various universities and international schools.