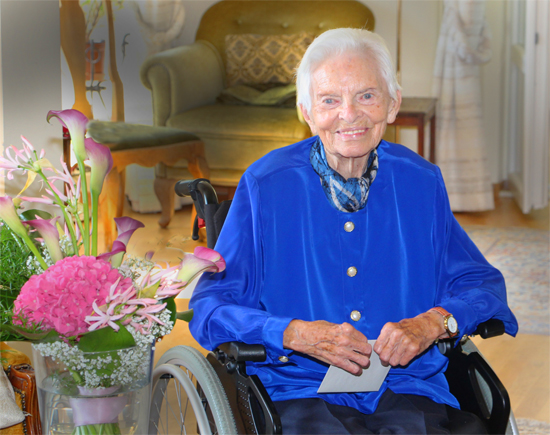 In 1947, she went on a transatlantic journey with her two young children to reunite with Fred in Switzerland. Fred was a US Army officer who transferred to Germany shortly after the war. He was born in Switzerland and had close ties to his country of origin. This reunion was intended to be 6 months, but lasted 70 years.

Recognizing the need for summer holiday opportunities for children of the many US military and expatriate families, Fred and Sigrid opened the International Ranger Camps in 1949. While Sigrid developed the camp operation, Fred planned and opened over fifty US Department of Defense schools.

The camps provided an environment where international understanding and unity was put above all else. This was greatly needed in a time when Europe was still suffering from the trauma of World War II. Sigrid found great fulfillment in the impact her camps had on the lives of the children and counselors. This is when she and Fred started dreaming of founding a school where students from all over the world would be taught values of international understanding and tolerance. Their students, they hoped, would return to their home countries as citizens of the world.

Their dream was fulfilled in 1960 with the founding of Leysin American School (LAS). A few years later, they also established the American College of Switzerland, which became independent in 1976. After Fred and Sigrid retired in the early eighties, LAS continued to develop under the leadership of their son Steven and daughter-in-law Doris. Today, Sigrid’s grandchildren, Marc-Frédéric and Christoph, lead the school in educating 340 students from over sixty countries to become citizens of the world.

Sigrid, during her retirement years, remained an avid reader and closely followed global politics until the end of her life. She was disturbed by recent elections and votes, which have resulted in stronger nationalist rhetoric and policies at the cost of healthy patriotism in several countries around the world.

Sigrid was officially honored for her contributions to international education by the President of Iceland with the Medal of Falcon (1988). She and her husband were awarded honorary citizenship by authorities of the town of Leysin (2007), shortly before her husband passed away.

Sigrid Ott-Benson passed away on April 23, 2017 in the home of Steven and Doris in Leysin. She is survived by her daughter Aldis, husband Rudi, and their three daughters and families, as well as Steven, Doris, and their three children and families. Sigrid will be remembered by the thousands of young people, who passed through the gates of the International Ranger Camps and the Leysin American School.