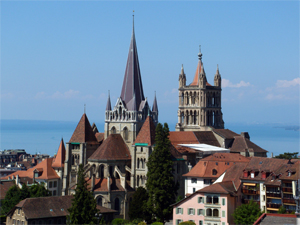 Hosted by The International School of Lausanne, March 12th and 13th, 2010

Teachers and educational administrators are constantly faced with the challenge of offering first-class educational experiences in the best possible learning environment within a complex framework of material and financial constraints. These limitations of space, funding, resources, time and staffing can appear to be daunting obstacles at times, yet they also provide opportunities for creativity and innovation. The recent worldwide economic turbulence and the increasing focus on the urgent need for a responsible global approach to climate change further emphasise that we must review our dependence on resources of all kinds.

The 2010 SGIS conference will focus on ways in which we can make the most efficient use of the precious resources we have, and to learn how effective teaching and learning can take place without recourse to expensive, complex and wasteful resources and practices. Speakers will address the issues of efficient time, space and resource management - including human resources - and their impact on effective learning, suggesting imaginative ways to free our schools from the tyranny of high costs and over-administration as well as demonstrating how often powerful and complex learning experiences are the result of simple approaches, both highly traditional and bravely innovative.

Speakers will explore some of the following questions:

Kathy Larson is recognized nationally and internationally for her inspiring work to build healthy professional communities through methods that simultaneously strengthen the system and the performances of people who work within them. She developed a performance-based training “Classroom Walkthroughs for School Systems” (©2004) and delivered this training to both private and public school leaders throughout the United States, Canada, and most recently to the Zurich International Schools.

Her article, “Developing Reflective Practice through Snapshots of Teaching and Learning” is featured in the National Association of Elementary School Principal publications, Leadership Compass.

In the past ten years as Wisconsin’s lead consultant for educational reform, her work remains instrumental in the delivery of a statewide model for educators’ license renewal. She co-authored The Mentoring Year (2002, Corwin Press) and is in the process of writing a book on a three-tiered educational appraisal system building quality improvements for high caliber learning. She can be reached at This email address is being protected from spambots. You need JavaScript enabled to view it..

John Littleford served as teacher, trustee and head of school in his 25 year career with independent schools. Since 1992, he has been a full-time consultant to over 3000 independent and international schools as well as foundations, universities, a range of non profit organizations and for profit companies

Mr. Littleford has been a speaker, presenter, workshop leader and keynote on several continents and is the author of a highly popular book on faculty salary systems in independent schools. His Firm's Newsletter is published five times a year to 25,000 trustees and school leaders and is circulated and read worldwide.

Helen Peter is a versatile and experienced teacher, adviser, consultant and trainer in education. She has worked across all phases, teaching literacy, drama, EAL, Special Needs, English and PSHE in primary, special and secondary settings. She has trained and worked alongside staff teams from all sectors, teaching emotional literacy, accelerated learning, special needs and circle time.

Her passion is in learning and personal development at all ages. Helen’s background in Special Needs means she has a very broad understanding of strategies to empower and improve learning.

She has worked as an adviser, teacher, team leader, SENCO and advisory teacher; her last teaching post was as SEN teacher in a school in special measures. She now devotes herself to training and research throughout the country. She has also successfully facilitated training for the Consultancy overseas.

Mark Richmond is a social scientist and educationist who, as an academic and as a UNESCO staff member, has been engaged with ‘education for development’ issues over many years. He graduated from the University of Sheffield (UK) with an honours degree in Political Theory and Institutions and has a Master of Philosophy degree in comparative education from the University of Hull (UK). He has worked in a range of secondary, post-secondary and higher education positions in the UK and the USA, with particular interests in (a) the policy/research interface relating to structured social inequalities and (b) education in developing countries, with special regard to policies of educational reform in Latin America and the Caribbean and educational responses to emergency, refugee and post-crisis situations, notably in sub-Saharan Africa.

On joining UNESCO in 1994, Mr Richmond worked on establishing post-crisis educational programmes in NW Somalia, refugee camps in Tanzania and post-genocide Rwanda before becoming head of UNESCO’s Programme of Education for Emergencies and Reconstruction (PEER) in Nairobi, Kenya, covering the Horn of Africa and Great Lakes regions. Subsequently at UNESCO Headquarters, he was involved in supporting educational programmes in field operations in sub-Saharan Africa, Iraq and Kosovo; in 1999-2000, he served as Deputy Head of UNMIK’s Department of Education and Culture in Kosovo. Mr Richmond then worked on the reform of UNESCO’s Education Sector and on the follow-up to the World Education Forum on Education for All (Dakar, Senegal, 2000). During the period 2001-2006, he served as Senior Executive Officer in the Office of the Director-General of UNESCO in the capacity of English speechwriter and focal point for education.

Mr Richmond is currently Director of the Division for the Coordination of UN Priorities in Education, responsible for the UN Decade of Education for Sustainable Development (DESD, 2005-2014); education and HIV & AIDS (he is the UNESCO Global Coordinator for HIV and AIDS); and education and post-conflict/post-disaster situations, including the path-breaking ‘Education under Attack’ studies of targeted violence against learners, teachers, academics and educational institutions.

David Selby is a Founding Director of Sustainability Frontiers, an international alliance of academics and practitioners addressing climate change and sustainability education and eco-pedagogy.  He is also Adjunct Professor at Mount St Vincent University, Halifax, Nova Scotia, Canada. He was previously Professor of Education for Sustainability and Director of the Centre for Sustainable Futures, University of Plymouth, United Kingdom, and, before that (1992-2203), Professor of Education and Director of the International Institute for Global Education at the Ontario Institute for Studies in Education of the University of Toronto, Canada.  He is a citizen of both Canada and the United Kingdom.

David has a long-standing international reputation for his teaching and writing on the theory and practice of environmental, global, humane, human rights, life skills, and sustainability-related education. More recently he has become known for his path finding writing in the emerging field of climate change education.

As Director of the Centre for Sustainable Futures, a Centre for Excellence in Teaching and Learning funded by the Higher Education Funding Council for England, David was tasked with transforming the University of Plymouth into ‘an institution modeling university-wide excellence’ in sustainability performance and achievement.  He worked with a core team of nine as well as some forty-five seconded academics in working towards this goal.  He now takes his experience of sustainability-related institutional change to schools and universities in the United Kingdom and elsewhere.

David has lectured and facilitated seminars and workshops on environmental, global and sustainability-related education in s ome thirty-two countries as well as for various United Nations organizations. He has been a consultant to UNESCO, UNICEF and the International Development Research Council of Canada, a Visiting Fellow at the University of Minnesota, a Visiting Lecturer at the Free and Technical Universities of Berlin, and a Visiting Professor at Daito Bunka University, Tokyo.

A long-standing consultant on basic, life skills and global education for UNICEF, David supported UNICEF-funded national education reform initiatives in Lebanon and Jordan (1993-8); Armenia (1997-2000); Albania (1997-2001); Iran (2000-5); and Kazakhstan and the Central Asian Republics, where he led a team of some twenty-four Canadian and UK academics (2002-5).  He also served (2006) as evaluator of the Caritas pre-school program in Kosovo.

David was the co-recipient of the Canadian Peace Education Award in 2003 and is a Fellow of the Royal Society of Arts.

He is an avid gardener, mountain walker, wild flower photographer and, latterly, beekeeper.

In January 1999 mountaineer Jamie Andrew and a climbing partner were trapped for five nights on the storm bound icy summit of a French mountain.  The rescue, which was one of the most dramatic in the history of the Alps, came only hours too late to save his partner. Jamie, despite suffering hypothermia and appalling frostbite, survived.  Days later all four of his hands and feet were amputated.

For many this fate would have meant the end of all hope, but not for Jamie.  Since losing his hands and feet Jamie has achieved some incredible feats.  He has learned to walk again, taken up skiing, run a marathon, and remarkably, returned to climb once more in the mountains that he loves so much.

Jamie has written a best selling book about his experiences, Life and Limb, and he is also the co-founder of ‘500 miles’, a charity which provides aid and care for amputees in deprived parts of the world.

Dr. Carolyn Crippen is Associate Professor of Leadership Studies, Faculty of Education, University of Victoria, British Columbia, Canada. She is the former Assistant Dean of Education at the University of Manitoba.
Academic Degrees: BA (Interdisciplinary-Carleton); MEd (Special Education-Ottawa): PhD (Educational Leadership - North Dakota). Her research areas include moral leadership, teacher education, healthy learning communities and senior administration. She has published extensively and has presented at the Universities if Oxford, Iceland, and Penn State.

Carolyn has been a classroom teacher, special education resource, vice-principal, principal, curriculum consultant, and superintendent of schools. She has taught or administered all grades from Kindergarten to Graduate level. Carolyn works collaboratively with public and private educational organizations and is particularly focused on the creation of caring and effective learning communities.